According to The Richmond Times-Dispatch, on Saturday former Gov. Jim Gilmore made hints at a possible presidential bid in 2016 as he laid out his national plan for job creation, tax reform and national security for Virginia Republicans at the annual Donald W. Huffman Advance.

“People are concerned with the future,” Gilmore said at the event, named after the former chairman of Virginia’s GOP.

He continued, “It is our duty as Republicans to make it clear that the free-market system is an ally of the people.” Gilmore now serves as the head of the Free Congress Foundation, a conservative policy organization and was the governor from 1998-2002.

“The growth of the United States’ economy is the only way out of the challenges we face,” proclaimed Gilmore, calling for a cut of both personal and corporate income taxes and an elimination of the estate tax.

Gilmore showed interest for the 2008 GOP nomination, but dropped out in July of 2007 after struggling to raise money. On Saturday he stated that he wouldn’t rule out another run.

“We need more people in Congress who understand how to grow the economy, who believe in American and who want to make us stronger. That’s why I support Dave,” announced Romney in a Facebook post.

Romney also made a stop on Tuesday evening in support of Barbara Comstock, who is running for Virginia’s 10th district. Comstock served as the head of Romney’s Virginia campaign in 2012.

Romney’s support for both Brat and Comstock also served as an effort to  boost the candidates’ funds right before Tuesday’s midnight fundraising deadline for the third quarter.

Additionally, Romney’s backing helps to reinforce Dave Brat’s claim that he has worked to bring unification to the GOP since he dethroned House Majority Leader Eric Cantor in June’s primaries.

It has been almost three months since House Majority Leader Eric Cantor’s shocking primary loss to David Brat, the Tea Party candidate and Economic professor at Randolph-Macon College. The Richmond Times-Dispatch reports that despite all of the media attention, Brat remains steadfast in his political principles.

Brat’s win over Cantor, a 14-year Congressional veteran, who out raised him $5.7 million to $231,000 baffled political pundits and gained both Brat and the Tea Party national news. “It’s still amazing,” Brat observed in a recent interview.

The unexpected win and subsequent media attention following his win caused Brat to trip up when asked certain policy questions, such as his position on arming Syrian rebels and raising out the minimum wage. His lack of preparedness alarmed many.

Since then Brat has worked hard to prepare himself for the intensification of the campaign. He was worked hard to tackle foreign and domestic policy issues and delivered a number of stump speeches. Brat has also tried as hard as possible to avoid media scrutiny, which has made it difficult for him to establish a public profile.

However, despite critics and skeptics Brat plans on running his campaign on the Tea Party ideals.  Brat remains a free-market conservative who is pro-life and hard on immigration. He has remained critical of immigration overhaul, and many political commentators would even contribute Brat’s characterization of Cantor as soft on immigration as one of the reasons he won over the incumbent.

Brat’s dethroning of Cantor has already given more strength to the rising Tea Party. A win for Brat would even further the influence and credibility of the party, as well as cause a identity conversation among the struggling Republican Party.

The Richmond Times-Dispatch reports that Del. Ben Chaffin Jr. R-Russell has won th election to fill the seat in the state Senate left by Sen. Phillip Puckett. This victory means that the GOP will remain in control of the state Senate.

With a 21-18 lead in the state Senate the Republicans will maintain control even if a Democrats wins the seat to replace the retiring Henry L. Marsh November 4. Chaffin easily beat out his opponents, Democrats Mike Hymes and independent Rick Mullins.

Chaffin’s win could also mean Gov. Terry McAuliffe will face even more legislative challenges in both chambers as Republicans will hold almost two-thirds of the seats in the House of Delegates.

Speaker of the House William J. Howell, R-Stafford said of Chaffin, “During his short time in House of Delegates, Ben has proven to be a thoughtful and capable legislator who can solve problems for the people of Southwest Virginia.”

Virginia Republicans are moving forward with a state budget without a Medicaid expansion plan after Sen. Phillip Puckett (D) resigned on Monday.

The resignation created a power shift in the previously stalled General Assembly, giving the Republicans a 20-to-19 majority, allowing them to unexpectedly call the Senate back into session on Thursday, according to the Washington Post. They hope that the can pass the new budget through the Senate and send it to Gov. Terry McAuliffe that same day for his approval.

McAuliffe, who has placed Medicaid expansion as a top priority, has been exploring the possibility of using his executive powers to circumvent the conservative House and Senate to expand Medicaid without legislative approval. His executive power technically encompasses job creation and expanding Medicaid, as well as expanding abortion rights and gay rights. However, the consequences of acting without support from the General Assembly could be extremely damaging for his public image.

Meanwhile, Republicans say that “they will pass a budget without Medicaid expansion before Puckett’s seat is filled,” according to the Washington Post. Even if the budget was stalled until a special election, Puckett’s district now leans much farther right than it did at the time of his election, so the seat will most likely be filled by a Republican.

Now that the Democrats have lost control of the Senate, their only hope is a separate special session that would address Medicaid expansion, according to the Washington Post.

Sen. Phillip P. Puckett (D-Russell) resigned today in what seems to be in exchange for a new job for himself and a judgeship for his daughter.

Democrats are crying foul, claiming that Republicans are buying Puckett out with job offers in order to undermine Gov. Terry McAuliffe’s attempts to expand Medicaid under the Affordable Care Act. The bitter disagreement over the expansion is holding up the development of a state budget, which must be determined by July 1.

Republicans deny that Puckett is resigning in exchange for the jobs, but his departure gives the GOP a temporary 20-to-19 majority in the Senate while two prominent Democrats are out of town. McAuliffe admitted that “Puckett’s resignation created ‘uncertainty’ for his plan to expand the federal-state health program,” according to the Washington Post.

Some Democrats are trying to determine if they have the power to block Puckett’s new job appointment, but his daughter has already taken her judgeship in Southwest Virginia. Since the Senate has a policy against appointing relatives of active legislators to the bench, Puckett had to resign in order for his daughter to legally become a judge.

Rep. Paul Ryan (R) will headline the GOP’s fundraising dinner on June 6 in Roanoke, according to the Richmond Times Dispatch.

The gala will occur on the first day of the state Republican Convention. During convention, the party will choose their candidate to challenge Sen. Mark Warner (D).

The dinner, called the Commonwealth Gala, includes various levels of sponsorship and allows attendees to brush elbows with some of Virginia’s political elite. For $2,500, one could become a “gala dinner host” and receive four VIP reception tickets, a photo with Rep. Ryan and dinner for 10 guests.

The tickets for the dinner start at $75.

Sen. Mark Warner is running for Sen. John Warner’s Senate seat. John Warner held the seat for 30 years; John told the AP in a telephone interview that he is choosing Mark Warner over Republican Ed Gillespie in November’s election. The Warners are unrelated.

“There are times you must, I think, recognize that certain individuals are superior in their talents and in what they have done and can potentially do for your state,” John Warner said. 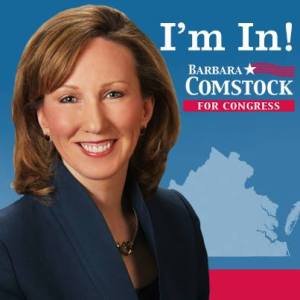 Barbara Comstock announced today that she will vie for the GOP nomination for retiring Rep. Frank Wolf’s (R.-Va.) seat in the 10th District.

Comstock is the first to announce her bid for the highly competitive seat. She is familiar to the Virginia political arena, formerly serving as an aide to Rep. Wolf, a current state legislator and an advisor to many Republicans.

In her written statement, she stressed, “I am running for Congress because I believe my strong record as a common sense conservative leader is what is needed in Congress. I know how to effectively fight for Northern Virginia’s hard working taxpayers having first learned from Congressman Wolf working in his congressional office,” according to The Washington Post.

Recently, we announced that Virginia Republicans retreated to the Homestead Resort in Hot Springs, Va., to plan for the upcoming midterm elections and to regroup after some devastating losses at the state and local levels in November’s elections.

After a few days away from the hustle and bustle of their daily lives, Republican leaders still didn’t really come to a consensus about which way the GOP should go in the increasingly moderate state of Virginia.

Some leaders, such as Virginia’s former first lady Sherry Allen, believe the party should step away from firebrands like E.W. Jackson. Jackson lost his bid for lieutenant general to Sen. Ralph Northam by a very large margin, and party members and non-members have blamed Jackson’s extreme views for the loss. Allen did ask GOPers for moderation on social issues; Jackson and others urged the party to double down on abortion and the state’s same-sex marriage ban.

GOP leaders also suggested that the party adopt a convention, rather than a primary, to select next year’s candidate for U.S. Senate. This decision is likely to result in a more conservative candidate, a tough sell in statewide politics.